Whatever happened to 3620 Clifton Avenue?

We first visited 3620 Clifton Avenue back in January. That’s when TPTB had made the decision to remove the house from the demolition list and give the owners another chance to make the necessary repairs. 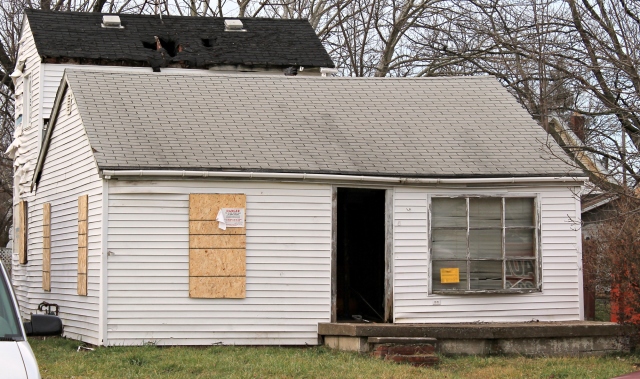 “I am amazed that this house, which has been inspected and re-inspected by TPTB (and then some), was deemed worthy of a second chance. Sitting exposed to the elements for at least five years, sold for $200 to two guys who let it sit untouched for two more years (sale date January 2011) – it meant nothing to anybody until the city came knocking with the wrecking ball.”

Just a few days later, we revisited the house because the Demolition Board of Appeals decided to give the owners five more weeks to make repairs.

From that post:
“According to this article, “…owners of 3620 Clifton Ave. will get another five weeks to make repairs to that South Lorain home. For a second week, the condition of the structure sparked the most discussion in the demolition appeals board meeting.”

I had gone by the house on Tuesday and was surprised to see they had started on the exterior. Click on any of the following images to see them bigger, if you dare. 😀 ” 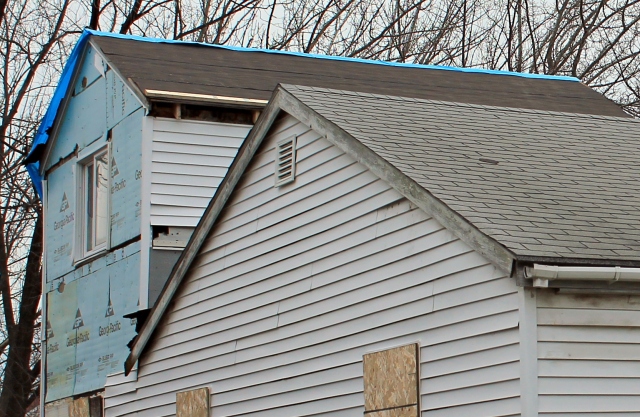 Demolition Board of Appeals meetings are held during the week and are impossible for me to attend. At the meeting held February 28, 2013, the owners were given another month to continue their work on the property. They were granted this extra time because they had roofed and secured the house, plus cleaned up the yard. [source]

Since then, 3620 Clifton Avenue has never been mentioned in the newspaper again. I’ve gone by there a few times over the past couple months, but never stopped to take pictures because nothing had changed. When I went by there two weeks ago, I surprised to see that the houses on either side had been demolished recently! 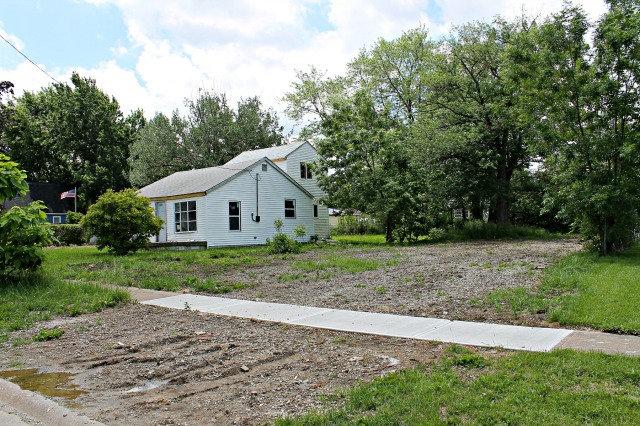 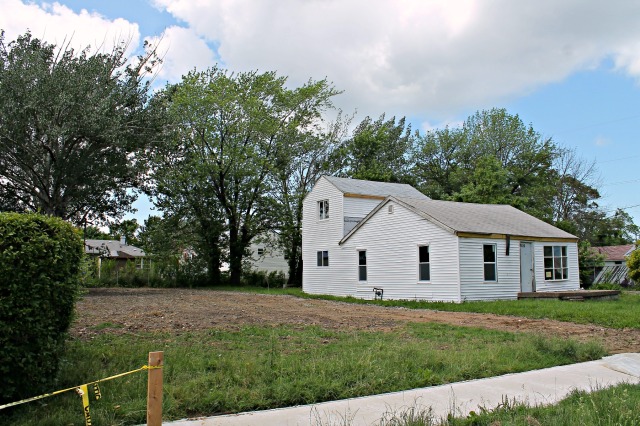 Good thing there are new windows all around (even if some are open and/or broken),
as there still isn’t any electric service. Wonder how that interior is coming along? 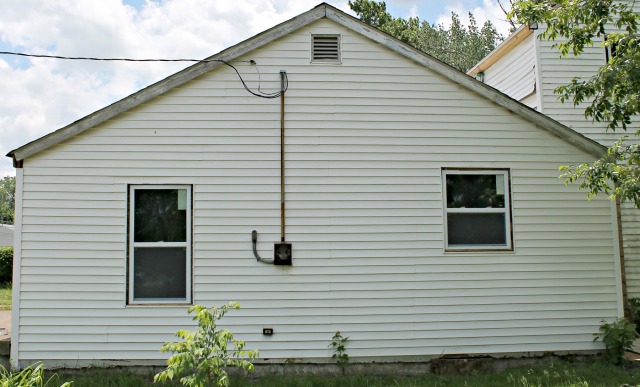 I know there are times when my pictures might not look as if they are straight. I do my best to make sure everything lines up and when it doesn’t, hopefully a little post processing tweak will make things right. This time, I wanted you to see what I see when it comes to the “straighten” grids. This picture is right out of the camera. I stood directly in front of the house and lined my shot up with the left side of the door frame. It isn’t me – this house does not sit straight! 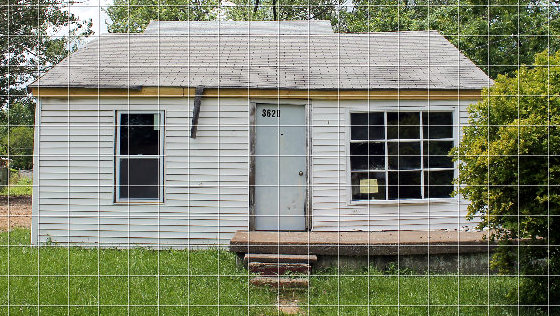 How long does the City have to let this go on? Are the owners now caught up in the cycle of permit perpetuity? As long as there’s a permit in the window, the City will continue to watch from the sidewalk. 🙄

As Seen In Lorain: 3620 Clifton Avenue and the second second chance

I am not employed by the City of Lorain in any way, shape, or form.
I definitely am NOT a building inspector. I do not know the individuals who own this property, nor do I have any personal issues with them.

I am a Lorain blogger with a vested interest in the improvement of my city.
This blog belongs to me and I speak for myself. I am trying to understand what criteria the City of Lorain uses to decide who gets a second chance to rehabilitate their property and who doesn’t. Apparently, all I have to say is that I have some money (I don’t have to prove it) and show the city my plans and that’s good enough.

Yesterday was the Demolition Board of Appeals meeting at City Hall. I was about a half hour late and missed five of the six appeals, one being a review of the plans for 3620 Clifton. I was disappointed to find out that this house has been given yet another stay of execution. A second second chance.

According to this article, “…owners of 3620 Clifton Ave. will get another five weeks to make repairs to that South Lorain home. For a second week, the condition of the structure sparked the most discussion in the demolition appeals board meeting.”

I had gone by the house on Tuesday and was surprised to see they had started on the exterior. Click on any of the following images to see them bigger, if you dare. 😀 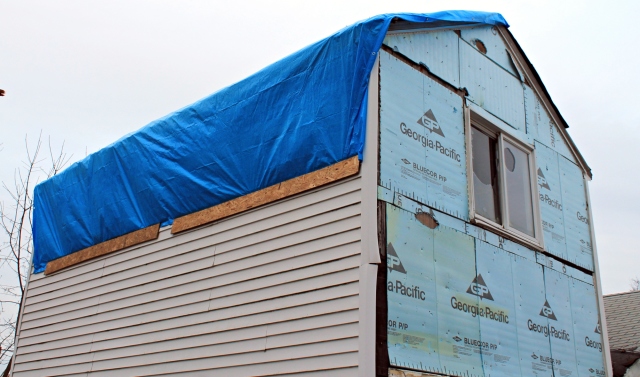 This house sits on a slab and has foundation damage on every side. 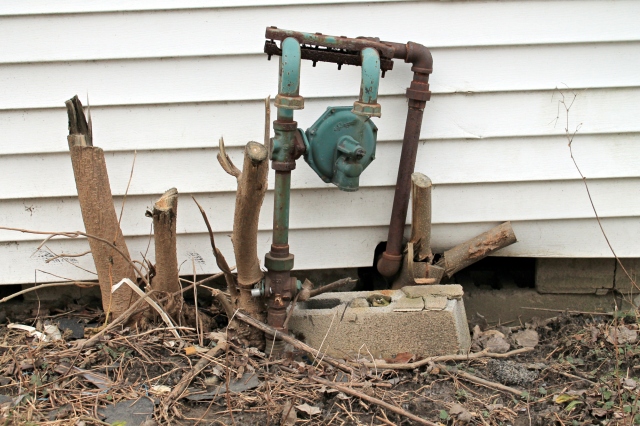 to the left of the gas riser 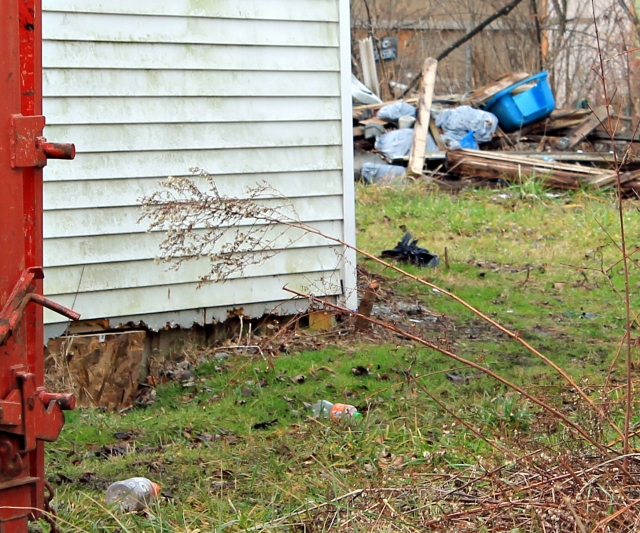 It is my understanding that the owners of 3620 Clifton presented an acceptable plan to the Board and will have to bring proof of progress to the next meeting on February 28th.
I will be there.

The only way the Building Department knows if these serial second chancers are completing the work to code is if they report back to say the work is done and request an inspection. The Building Department can only drive by and look at the outside of the house from the public sidewalk or an adjoining property (with the owner’s permission). As long as the outside looks good and the house is secure, there’s nothing else the Building Department can do unless they are invited inside by the homeowners. That needs to change. Stop the repeated prostitution of problem properties in Lorain. Break this vicious cycle before it completely breaks this city for good. It’s time, Lorain. We need point of sale inspections and an effective property inspection and maintenance program implemented immediately. Take a cue from other Northeast Ohio cities that are also full of older housing and building stock.

From this post:
More noodling around in search of point-of-sale inspection information led me to the City of Cleveland Heights website and their Inspectional Services.

Not only do they have all the requisite residential inspections, “Commercial properties require an inspection involving the interior and exterior of the property and are conducted every three years. Inspectional Services notifies the owner of the building when inspections are to take place.”

Imagine what our downtown could look like if we could get the property owners to address the items on this inspection checklist that are relevant to their property/ies.

Vacant buildings must be registered with the city.

Out of county property owners must register and designate an in-county agent.

“Owners of real estate in Cleveland Heights, including single-family and two-family dwellings, duplexes, apartments, condominiums and commercial properties, are required to obtain a Certificate of Inspection (Point-of-Sale) prior to entering into an agreement to sell a property. Sellers must provide the prospective purchaser with a copy of the original Certificate of Inspection (valid for one year from the date of issuance) and Certificate of Compliance (if available) prior to the execution of a contract of sale. Cost for the Point-of-Sale Inspection is $150.00 for the first unit and $50.00 for each additional unit. For example: a two-family residence would cost $200.00, a four-unit apartment building would cost $300.00.”

As Seen In Lorain: 3620 Clifton Avenue and the second chance

In yesterday’s Morning Journal, there was an article about the decision made by the Demolition Board of Appeals to add 16 more houses to the demolition list. In that article, it was mentioned that the owners of one of the houses on the demolition list were given a second chance to make repairs. Even though it was noted by Demolition Board member, 5th ward Councilman, and neighborhood resident Eddie Edwards that “Before the sale, the house sat empty for about five years, with its doors and windows open and generally falling apart…” and “The new owners also waited a year before taking action to repair it…” AND the Board went out to see this house for themselves AND took the Fire Chief with them AND talked to the unhappy neighbors – the owners have $17,000 and a plan and that was enough for the Board to grant them a second chance.

If a house ends up on the demolition list, it is there for many many good reasons. The Powers That Be (TPTB) aren’t just riding around the neighborhoods randomly targeting houses for demolition. The reasons for demolition may not always be apparent to us on the outside, but there are plenty out there that are glaringly obvious candidates. As Eddie Edwards also said, “…the city should send a message by not relenting on the ruling that the home is a nuisance that should be torn down.” Especially when we are talking about a house that just last week the same Board had declared “…a nuisance to public health…”! Yet relent on the ruling is EXACTLY what they did for Joseph Barbee and Nathaniel Johnson, the owners of 3620 Clifton Avenue, knowing full well that “…neighbors “were fed up” with condition of the property and wanted city action…”.

Let’s take a look at 3620 Clifton over the years, in the order the pictures appear on the Auditor’s Site (click on any picture to see it larger): 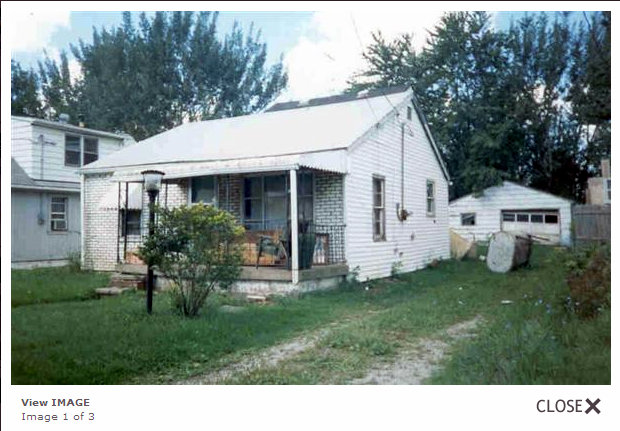 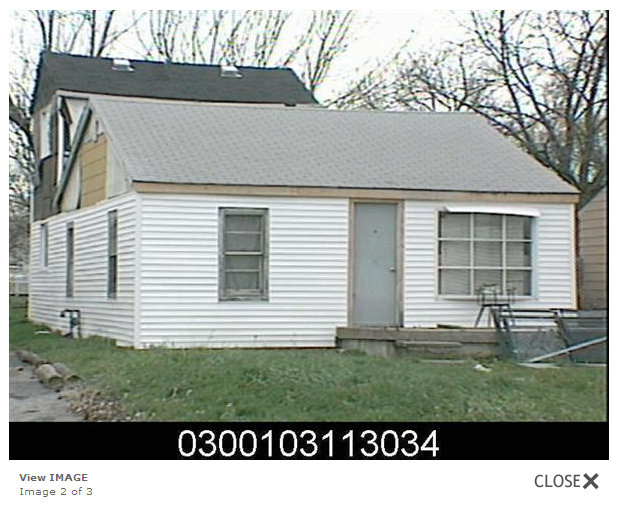 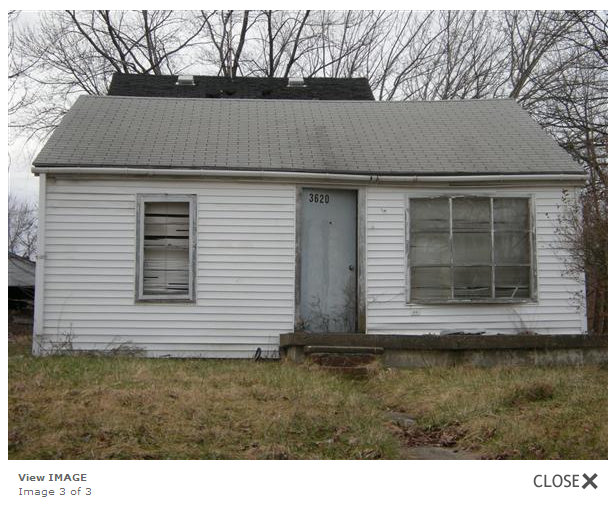 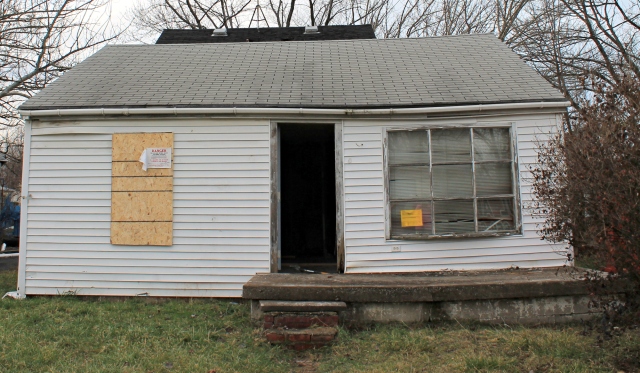 I am amazed that this house, which has been inspected and re-inspected by TPTB (and then some), was deemed worthy of a second chance. Sitting exposed to the elements for at least five years, sold for $200 to two guys who let it sit untouched for two more years (sale date January 2011) – it meant nothing to anybody until the city came knocking with the wrecking ball. (screenshots from parcel results search @ Auditor’s Office website) 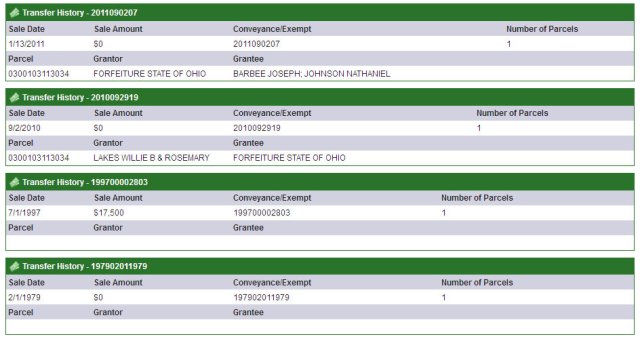 The Auditor’s Site also reveals that the property taxes haven’t been paid for two years.

Edited to add: Mr. Barbee and Mr. Johnson also appear on the delinquent tax list for their property at 240 Brace Street, Elyria.

I had the opportunity to talk to two guys who were working inside this house (without any obvious signs of protection for their lungs or clothing). They had stepped out onto the porch for a break. No introductions were made, however, I believe they were the property owners. I told them that I am a local blogger who had read the article in the paper and wanted to see what the city deemed worthy of a second chance. I questioned the amount of money they said they had to spend in regards to it being enough to make all the repairs, as I think this house on a slab is too far gone and they are in way over their heads. One guy said he expected the work to be completed for less than $17,000. I don’t think they can do it. I told them that I hope I’m wrong and that they are able to prove me and all the other doubters out there wrong. I’d love nothing more than to tell the story of their success.

If I were in their shoes, I would cut my losses, use part of the $17k to pay the tax man and the demolition man, then come up with a new and improved plan. The lots on either side of this house will be empty soon. Take some of that $17k to buy and combine them, then build a new house on a nice big lot in a decent neighborhood.

Although I’m not anybody who knows anything about completely renovating a house, I know it’s not the truth when someone stands there and tells me to my face that the interior is not all nasty and wet and moldy when the roof has looked like this for awhile:

These guys are working inside the house, yet all the windows are boarded up and there was no sign of electric light coming from the interior. I did not ask to see inside, nor did they offer to let me see. There’s a lot of stuff in the dumpster, but they’ve got a long way to go. I told them I would be back. This is definitely one I’ll be keeping an eye on.

Warped siding on two-story section of the house